I woke up this morning with a strong desire to sew something–not apparal, I wasn’t ready to just up and start a big project, so I looked through some sewing books I had. I liked a lot of the projects in Kathreen Ricketson’s book Kid’s Crafternoon Sewing. A lot of the projects were for younger kids, though, and I originally checked out the book to make something for my little brother Marck (more about him in a minute.)

One project I really liked was bunting flags.

I love the look of bunting flags and they’re so easy, so I made some! The book comes with free patterns too, so of course I love that.

Apologies for the blurry image. Cutting the flags is a breeze- you just fold the fabric in half, laydown the pattern, cut out the shape, and sew! Crazy easy. I have tons of little kid scrap fabric, so I used lots of different patterns.

If only the sewing part went so well as the cutting. My machine was getting the thread all tangled, and the tension is way off…I’ll look into that.

The pattern has your choice of two shapes–I chose the leaf one.

Once the flags are sewn, you just have to sew them on to ribbon, bias tape, anything you have. I used bias tape, but I only had about a yard and a half, and it was purple. The other bias tape I had was pink, so I chose purple. I don’t really use bias tape that often, so I don’t have much. I had to layer the flags because I had so little bias tape.

The result: I like it! It’s super cute, however, I do have some problems with it that all my fault.

1. It looks flat. That’s because it is flat! But I might hang it some where else where ot has a chance to shine from both sides.

2. I didn’t have much bias tape, so it doesn’t have the length I wanted it to be.

3. The bias tape is messed up attached to the perfect little flags. At that point my machine kind of gave up.

I’ve told you that I’ve had a sister, but I don’t know if I’ve mentioned Marck. He’s five years old, and was adopted from Haiti around the time of the earthquake.  He’s my little sewing apprentice, he likes to sneak into my sewing room and drop thread and fabric everywhere, and he thinks that’s hilarious. Then I bore him with talking about sewing and fashion, so he runs away. So cute. 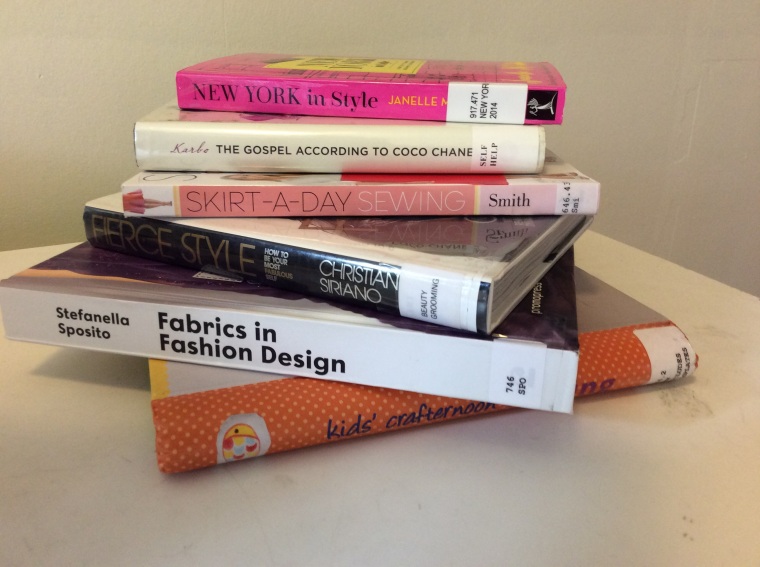 I checked out tons of fashion and sewing books from the library, so I’m going to go find some new projects. I’m thinking of making some bunting flags for my sewing room. Bye!

Disclaimer: All content on The Freckled Fashionista is Copyright © Stealing any images, text, or content on the blog is strictly forbidden.

Disclaimer: All content on The Freckled Fashionista is Copyright © Stealing any images, text, or content on the blog is strictly forbidden.